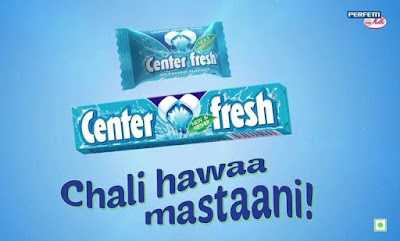 SMS 4-digit alphanumeric code printed on the wrapper of a Promotion Product  Eligible Person must SMS a Participation Code to 7090670906 All ₹1.00 mono pack of Center fresh (all flavours) are the ‘Promotion Products’

Samsung Galaxy J4 (J400FD, 16 GB) is a ‘Prize’; there are 1475 prizes on offer in the Contest Period  15th February 2019 to 9:00 p.m. on 14th April 2019  period of each day of the Contest Period between 9:00 am and 9:00 pm is the ‘Contest Time’  Organizer must receive the SMS either during the pre-Contest time and during the Contest Period  only One winner will be announced for each such Lucky Draw, except those held on Sundays; two winners will be announced for each Lucky Draw held on a Sunday.  names of winners shall also be announced on the Center fresh® Facebook page, and the Promoter shall endeavor to make said announcement on or before 15th March

Prize distribution: Organizer shall attempt to ensure that each Eligible Person who comes forward to claim a Prize by participating in the Verification Process will receive his/her Prize by courier within 14 days of being verified to the Organizer’s satisfaction. Please note: Complaints that the prize received is not as promised, or that it is received in a damaged condition, will not be entertained unless the Winner reports it by a phone call to 70906 70906 within 12 hours of receipt of the Prize
Posted by FforFree
Labels: Big Contests, Giveaway, India Free Stuff, Prizes