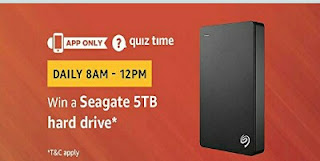 During the Contest Period you must sign-in to or sign-up from an account on the Amazon app participate by navigating to the page where 5 questions will be posted during the entire Contest Period.

Q1) If you have hyperosmia, It would mean you have a greater than average sense of ____. Fill in the blank

Q3) The first national flag of India is said to have been hoisted on August 7, 1906, and it was red, yellow and green. It has changed significantly since then. Who has designed the current, modern tricolour flag of India?

Q5) India plans to launch its first manned space flight, by 2022. What is the spacecraft that is being built for this program called?