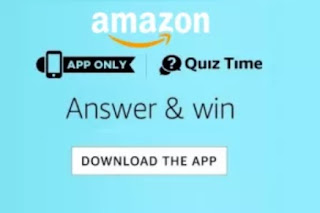 Participate by navigating to the page where 5  questions will be posted during the entire Contest Period. if you answer all the quiz questions correctly, you will be entitled for a lucky draw which will be carried out among all participants who have answered that particular question correctly

All Answers to win a amazon quiz Fossil Grant Watch

Q2) Which of these is the southernmost point of Africa and the beginning of the dividing line between the Atlantic and Indian Oceans?

Q3) Who was the second man to walk on the moon?

Q5) The Department of Posts in India has launched a ‘Cool EMS’ service, using which customers in India can import food items from ____ for personal use. Fill in the blanks.