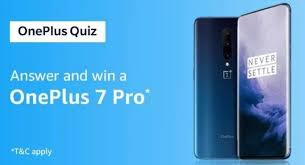 Answer all the quiz questions correctly, you will be entitled for a lucky draw which will be carried out among all the participants who have answered that particular question correctly

Q1) Which of these are NOT considered to be a macronutrient in context to human dietary requirements?

Q3) Which European country announced that it will levy a green tax on flight tickets from 2020, to encourage environmentally friendly transportation projects?

Q4) What is the name of the young Malayali actress, who became known as the ‘wink girl’ after a clip of her winking went viral last year?