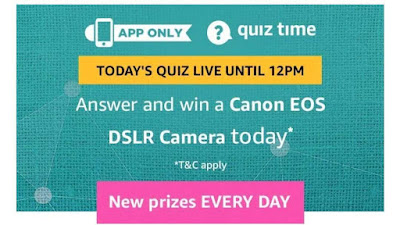 Sign-in to the Amazon.in App, you can participate by navigating to the page where 5 (five) questions will be posted during the entire Contest Period

Q1) India’s lightest bullet proof jacket was launched at the Police Expo 2019. It can withstand bullets fired from an AK-47 rifle. What is the jacket called

Q2) The Ministry of New and Renewable Energy launched a scheme to encourage farmers to use and generate solar power this year. What is it called?

Q3) What is the hybrid offspring of a male zebra and a female horse called?

Q5) India celebrates the National Broadcasting Day every year to commemorate the first ever radio broadcast in the country, which went live in 1927. Which day is it celebrated on?