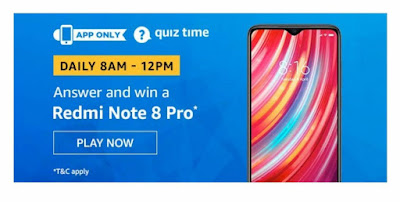 1) He was a Chinese-American actor, martial artist and philosopher. He once said ‘I fear not the man who has practiced 10,000 kicks once, but I fear the man who has practiced one kick 10,000 times’. He celebrates his birthday today. Who is he?
Answer – Bruce Lee
2) The Rock and Roll hall of fame describes him as ‘The greatest instrumentalist in the history of rock music’. He has songs like ‘Purple haze’ and ‘Hey joe’ to his name. He celebrates his birthday today. Who is he?
Answer –  Jimi Hendrix
3) Who averaged over 50 with the bat in test matches, but played only 1 one-day international, in which he was out for 0? (Hint : He was voted one of Wisden’s cricketers of the century).
Answer – Clive Lloyd
4) What famous comic book character is called the ‘Merc with a mouth’ because of his tendency to joke constantly?
Answer – Deadpool
5) Eritrea, which became the 182nd member of the UN in 1993, is located in which continent?
Answer – Africa
Posted by FforFree
Labels: amazon quiz, Big Contests, Prizes