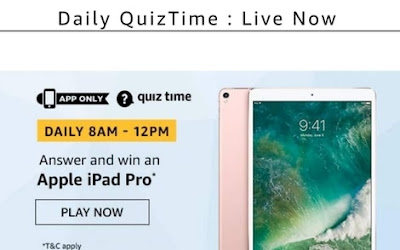 There will 5 Questions in the Amazon Daily Quiz Time, You need to give Right Answers To all these Questions to win BIG

Question 1: He played the role of Gregor ‘The Mountain’ Clegane in the HBO series Game of Thrones. He has won titles like Europe’s strongest man and World’s strongest man. He celebrates his birthday today. Who is he?Answer: Hafþór Júlíus BjörnssonQuestion 2: Who was the first male cricketer to take a hat-trick in a World Cup ODI match?Answer: Chetan SharmaQuestion 3: Google has launched a new cloud-based gamestreaming service. What is the name of the gaming service?Answer: Google StadiaQuestion 4: Who has been conferred with the Indira Gandhi Prize for Peace, Disarmament and Development 2019?Answer: David AttenboroughQuestion 5: India recently played and won their first ever Day/night test match. It was played with a pink ball against Bangladesh. Which 2 teams played the first ever pink ball test match?Answer: Australia vs New Zealand