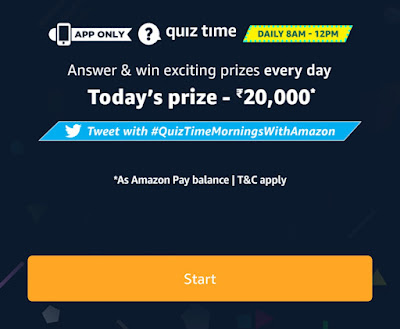 Amazon 25th November Quiz Answers
1. When he scored a century in his last test appearance, he became the first person to score a century on debut and in his last test match. Who is he?
Answer – Greg Chappell
2. In the 1975 Bollywood movie ‘Sholay’, what was the name of Basanti’s horse?
Answer – Dhanno
3. In context to geography, what are ‘Isohyets’?
Answer – Lines on a map showing equal rainfall
4. Which sultan declared himself as ‘Sikander-I-Sani’ which means the second Alexander?
Answer – Alauddin Khaliji
5. In which country would you find the Table Mountain, a flat-topped mountain forming a prominent landmark overlooking the country’s capital?
Answer – South Africa
Posted by FforFree
Labels: amazon quiz, Big Contests, Prizes