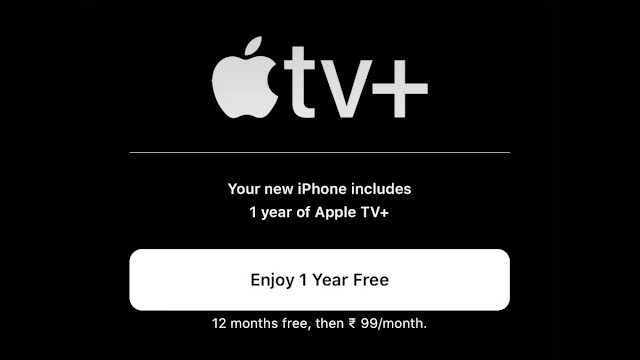 Apple TV+ is now live in more than 100 countries worldwide. In India it costs Rs. 99 per month, for you and 5 family members after a 1 week of free trial. If you bought an Apple device recently, you might be eligible for a one-year free subscription

1 year free Apple TV+ subscription is available to who bought a new iPhone, iPad, iPod touch, Mac, or Apple TV after September 10 2019 If you're wondering how you can avail it. Make sure if you have latest version of the operating system on your Apple TV device.Once you are in the Apple TV app, you will see Enjoy 1 Year Free offer message Students who aren't part of an Apple family don't have to fork over Rs. 99 per month, as Apple is bundling Apple TV+ with the Apple Music student plan, which costs just Rs. 49 per month in India.
Apple TV+ can be accessed on iPhone, iPod touch, iPad, Apple TV, and Mac using the Apple TV app. Additionally, the Apple TV app is also available on Fire TV Stick, as well as select smart TV and streaming boxes. And lastly, viewers can stream Apple TV+ shows Apple has yet to announce apps for Android, Android TV, PS4, Xbox one and all smart devices
Posted by FforFree
Labels: free, free deals