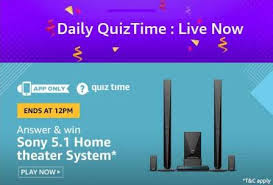 Question 1 – Today, 5th November is the birthday of a cricketer who currently holds the record for being fastest to 10,000 and 11,000 runs in One Day cricket. He currently has 69 international centuries to his name. Who is he?
Answers – virat Kohli
Question 2 – Against which country did Virat Kohli make his test debut in 2011?
Answer is – West-indies
Question 3 – Along with cricket, Virat Kohli has keen interest in Football. He is the co-owner of which Indian Super League(ISL) football team?
Answers – FC Goa
Question 4 – This Canadian singer sang the world famous song ‘Summer of 69’. He celebrates his birthday today. Who is he?
Answer is – Bryan Adams
Question 5 – In which country would you find Chichen Itza, one of the largest Maya cities and it was likely to have been one of the mythical great cities referred to in later Mesoamerican literature?
Answers – Mexico
Posted by FforFree
Labels: amazon quiz, Big Contests, Prizes