All Answer to win Vivo U10 Smartphones 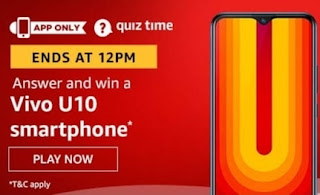 Q1: In October Who Broke Don Bradman’s Record Of Highest Average In Test

Cricket On Home Soil? (His Average Has Reduced Since)
Answer : Rohit Sharma
Q2: Which CEO Topped The List Of Fortune’s Business Person Of The Year
2019?
Answer : Satya Nadella
Q3: What Was Climbed For The Final Time In October 2019 In Australia? (It
Has Been Closed For Climbers Since)
Answer : Uluru
Q4: Which Indian Structure Featured In Time’s 2019 List Of 100 Greatest
Places In The World?
Answer : Statue Of Unity
Q5: Which Of These Cricketers Led India To Its First World Cup Final In The
21st Century?
Answer : Saurav Ganguly
Posted by FforFree
Labels: amazon quiz, Big Contests, Prizes