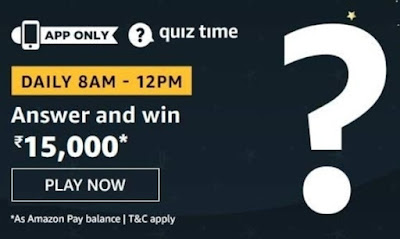 Q1 - Which city will play host to the 2022 Commonwealth Games (though there is a proposal to stage archery events in India)?Answer - BirminghamQ2 - Which film won the 'Best Motion picture- drama' award in the Golden Globe awards 2020?Answer - 1917Q3 - The Kolkata port has recently been renamed after which Indian politician?Answer - Syama Prasad MukherjeeQ4 - The Delhi-Udaipur Express train is named after which famous horse? (Hint: It was ridden by Maharana Pratap in battle and by millions of Indians as a scooter in the 90s)Answer - ChetakQ5 - Which country recently launched the largest radio telescope 'Sky Eye' to hunt for extraterrestrial life?Answer - China
Posted by FforFree
Labels: amazon quiz, Big Contests, Prizes