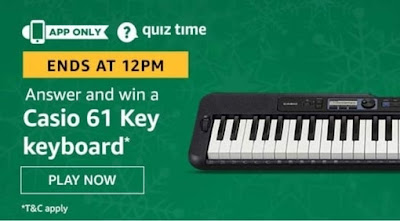 Amazon Daily Quiz Answers 24 January 2020Q1. Serbia recently won the ATP Cup. Which of these players did Novak Djokovic beat in one of the matches in the final?Answer - Rafael NadalQ2. Which famous Indian born in January, once occurred to Moscow disguised as an Italian nobleman named Count Orlando Mazzotta?Answer - Netaji Subhash Chandra BoseQ3. LANIDS is a development scheme set up by the government. Under this scheme, information technology based SMEs would be set up in which two areas?Answer - Lakshadweep, Andaman and NicobarQ4. The famous humorist Taarak Mehta is known for his column Duniya ne Undha _____. (Fill in the blanks)Answer - ChashmaQ5. P Mangesh Chandran is a known champion in which of these sports?Answer - Chess