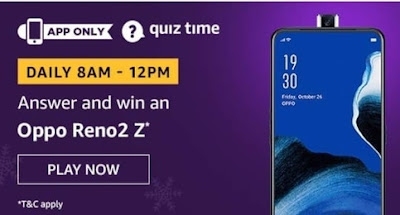 Amazon Quiz 12 January: Win 10000 Amazon Pay Balance (Answers)
Q1 - Swami Vivekanada was a monk and one of the most celebrated spiritual leaders of India. He worked tirelessly towards betterment of the society, in servitude of the poor and needy. He celebrates his birthday today. What is his real name?
Answer - Narendra Nath Datta
Q2 - _________ Day is celebrated in honor of Swami Vivekananda’s birthday. (Fill in the blank)
Answer - National Youth Day
Q3-What is the name of India’s first manned space flight project?
Answer - Gaganyaan
Q4 - Who among them recently won the World Rapid Chess Championship in the women’s category? (Hint: She was born in Andhra Pradesh)
Answer - Koneru Humpy
Q5 - Him Darshan’ Express that was recently launched connects which of the following places to each other?
Answer - Kalka – Shimla
Posted by FforFree
Labels: amazon quiz, Big Contests, Prizes