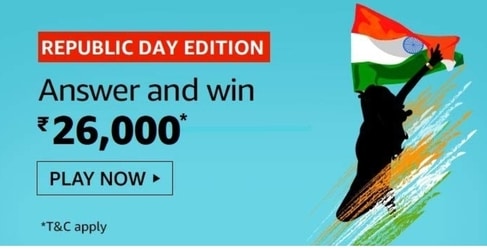 To be eligible for the Republic Day 2020 Contest, during the Contest Period you must sign-in to or sign-up from an account on the Amazon App


Amazon Republic Day Edition Quiz Answers Win Rs 26,000 Q1: In 1930 on 26th January, a famous resolution was taken. 20 years later it completely came to fruition. What was this resolution?
Answer : Purna Swaraj
Q2: Which present-day venue hosted the first ever Republic Day parade in 1950? (Hint: It was previously known as the Irwin Amphitheater.)
Answer: Major Dhyan Chand National Stadium
Q3: In the 2018 Republic Day parade, 10 heads of state belonging to a certain ‘Association’ attended the ceremony as chief guests. Which association was this?