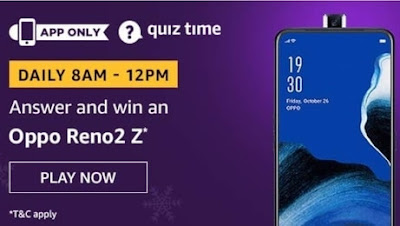 Q1 - Which of these was earlier known as the ‘Hailey National Park’ when it was established in 1936?
Answer - Jim Corbett National Park
Q2- Which country’s highest point is Mount Fuji, a dormant volcano?
Answer - Japan
Q3- Which was named as the ‘Word of the Year 2018’ by Oxford dictionaries?
Answer - Toxic
Q4 -In a 1999 Test match against South Africa, New Zealand tail-ender Geoff Allott batted a memorable innings which lasted 101 minutes. How many runs did he score?
Answer - 0
Q5-I can talk English, I can walk English, I can laugh English, because English is a phunny language’, which actor said this dialogue in a Bollywood movie?
Answer - Amitabh Bachchan
Posted by FforFree
Labels: amazon quiz, Big Contests, Prizes