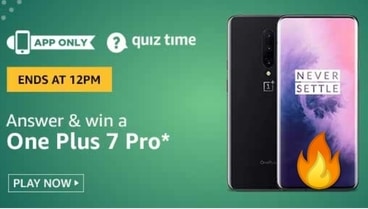 Question 1. Indian-American Arvind Krishna has been appointed as the new Chairman of which global tech company?Answer – IBMQuestion 2. What is the name of the $500 billion city-of-the-future that Saudi Arabia plans to build?Answer – NeomQuestion 3. Who recently won his career’s 33rd National title at the Senior National Billiards Championship?Answer – Pankaj AdvaniQuestion 4. The world’s smallest gold coin, which features Albert Einstein, was recently released by which country?Answer – SwitzerlandQuestion 5. The words ‘Ordem e Progresso’ can be found on the flag of which country?Answer – Brazil
Posted by FforFree
Labels: amazon quiz, Big Contests, Prizes