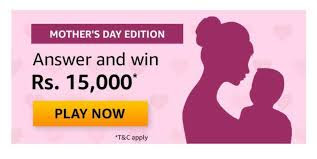 
Q1. Who organized a memorial for her mother at St Andrew’s Memorial Church, Grafton in 1908, recognized as the first Mother’s Day celebration?Answer - Anna JarvisQ2. Mother of Irene and Eve, which Polish-born scientist is the only woman to win the Nobel Prize twice?Answer - Marie CurieQ3. Prince Chungthanglen, Rechungvar and Khupneivar are the sons of which proud mother and six-time world champion?Answer - MC Mary KomQ4. Mother of Tara and Preetha, which Madras Christian College graduate was named the 3rd most powerful woman in the world by Forbes in 2008?Answer - Indra NooyiQ5. When Mother’s Day was first observed, various colors of which flower were used to symbolize whether your mother was living or not?Answer - Carnation
Posted by FforFree
Labels: amazon quiz, Big Contests, Prizes