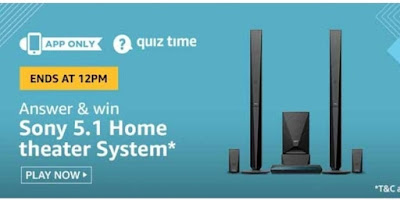 Login on Amazon App, if you do not have an Amazon account then sign up with your email.
After that, you have to go down on your homepage and on that, you will get the Banner of Daily Quiz, click on it. Now you have to click on start quiz and you have to answer 5 questions correctly

Q1: Neeraj Chopra, Recommended By The AFI For The Rajiv Gandhi Khel Ratna Award, Is Associated With Which Event?Answer 1: Javelin ThrowQ2: The Digital Rights Of Which Of These Movies Was Recently Sold To An OTT Platform For A Staggering Sum Of INR 125 Crore?Answer 2: Laxmi BombQ3: Which 13th Century Indian Temple will be solarized soon under the Central Government Scheme?Answer 3: Konark Sun TempleQ4: Which Indian Organization Made the 'NavRakshak' PPE Kit?Answer 4: Indian NavyQ5: Tsai Ing-Wen Was Re-Elected To A Second Term As President Of Which Asian Country?Answer 5: Taiwan
Posted by FforFree
Labels: amazon quiz, Big Contests, Prizes