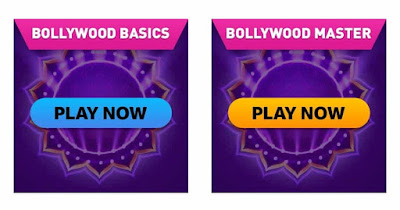 Quiz Mania is brought and made available to you by Amazon Fun Zone. The quiz is for entertainment purposes only, and designed for customers to test their knowledge on various topics. There are no rewards attached with these quizzes.Adding all Correct Answers of Quiz Mania’s Amazon Bollywood Master and Basics Quiz.

Question 1 – The film Gulabo Sitabo stars Ayushmann Khurrana with which of these legendary actors?

Question 2 – The movie Angrezi Medium stars which of these actresses as Irrfan Khan’s daughter?

Question 3 – Which of these actors is one of the producers of the movie ‘Tanhaji’?

Question 5 – In the movie ‘Dangal’ Aamir Khan portrays the role of which real life sportsperson?

Question 6 – Which of these 2020 movies features Malti Aggarwal and activist Amol Dwivedi as the main characters?

Question 7 – The wedding of which of these Bollywood stars famously took place in Tuscany, Italy?

Question 8 – What is the surname of the character played by Pankaj Tripathi in the Amazon Prime series ‘Mirzapur’?

Question 9 – Which of these organisations produced the Amazon Prime series ‘Panchayat’?

Question 10 – Chandra Barot and Farhaan Akhtar have both directed movies based on which of these iconic characters in Bollywood?

Question 1 – Which of these famous actors featured in BR Chopra’s Mahabharat as Raja Bharat?

Question 2 – The year in which Sholay was nominated for Best Film at the Filmfare awards, which movie finally won the award?

Question 3 – In the original Golmaal movie, Ram Prasad Sharma has to pretend to have a twin after Bhawani Shankar spots him watching a match in which sport?

Question 5 – In the movie ‘Tumhari Sulu’ which real life RJ stars as Albeli Anjali, a colleague of Sulochana, played by Vidya Balan?

Question 6 – ‘Sleepers’, ‘Patriots’, ‘Pariah’, ‘Dance of Death’ are some of the episodes in which Amazon Prime series?

Question 7 – In 1999, a famous director made his debut for Doordarshan with a documentary titled ‘The Forgotten Army’. Who was the director?

Question 8 – Which of these is a production company co-founded by Farhan Akhtar?

Question 9 – The Bollywood movie ‘We are Family’ starring Kajol and Kareena Kapoor is the remake of which Hollywood movie?