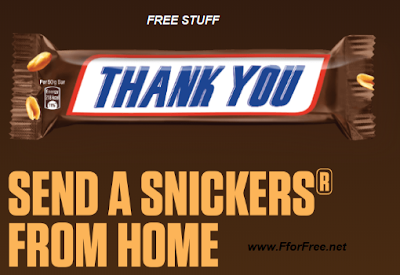 GIVE AN ESSENTIAL WORKER A FREE SNICKERS BAR AS A TOKEN OF THANKS. Whether they're nurses, policemen or firemen the brave essential workers still on the job are keeping us going. So, give a little something to keep them going: a free SNICKERS bar. Do you have a family member, friend or a neighbor who's currently being a hero? Enter their phone number and they'll receive a free SNICKERS voucher that can be redeemed at Grofers.

Step 1: Participant who desires to participate in the campaign, has to visit www.sendasnickersfromhome.in and enter their Name, Email ID, Phone No. >> ENTER HERE

Step 2: If the Participant enter their details, he/she will receive an SMS containing an OTP.

Step 3:  participate in the campaign by nominating one person of their choice (any essential worker, family or friends) by entering their mobile number and entering a text message. nominated person will receive a GIF via a weblink which will contain the text message entered by the nominee along with a website link which will enable the nominated person to claim their free reward.

1 person may win a maximum of 1 Reward throughout the Campaign Period. Once an eligible participant claims a reward, he/she will not be eligible to win another reward during the entire campaign Period.  total of 10000 reward are available for claims during the campaign period. Once the total rewards are exhausted i.e. 10000 count, the participants can still visit the web link and nominate a person. However the nominated person will be eligible to receive the GIF and not the Reward. Winners for Reward will be chosen via first come first serve basis by the agency, Big City appointed by MARS. i.e. First 10000 nominations or reward claims which ever is earlier.

Qinners will be sent a web link to claim Rs. 100 Grofers Voucher on their nominated mobile number. The nominated person will have 4 days to claim his/her reward on the weblink using their nominated mobile number failing which their claim will be forfeited. No prize will be awarded if the information presented by the Participant(s) at the time of entering the Campaign is not factually correct.
Posted by FforFree
Labels: free, Free Samples, Freebies, India Free Stuff