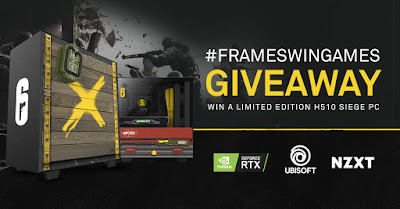 H510 Siege is the perfect companion, whether you’re breaching the Chalet or reinforcing the Club House. The side panels are themed in wall and door reinforcement design, keeping your components safe from attacking Operators. Features include an LED-illuminated '6' icon on the front panel, a '6' icon charm, and a Puck in a signature breach charge design-only available with the H510 Siege. Case secured
>> ENTER HERE

Eligibility: Open to all users globally except where prohibited or restricted by law. Sponsor and their respective parents, subsidiaries, affiliates, distributors, retailers, sales representatives, advertising and promotion agencies and each of their respective officers, directors and employees , and members of their immediate families and/or persons living in the same household as such persons, are ineligible to enter the Sweepstakes or win a prize.

Winner Selection: One winner will be selected at random by drawing from among all eligible Entries received throughout the Promotion Period. The random drawing will be conducted by 48 hours by Sponsor or its designated representatives, whose decisions are final. Odds of winning will vary depending on the number of eligible Entries received. Winner will be notified by email at the email address provided in the Entry Information on or about 48 hours after the random drawing. Potential winner must accept a prize by email as directed by Sponsor within 48 hours of notification. Any winner notification not responded to or returned as undeliverable may result in prize forfeiture. The potential prize winner may be required to sign and return an affidavit of eligibility and release of liability,

Prize: Only one prize per person and per household will be awarded. Gift cards and gift certificates are subject to the terms and conditions of the issuer. Prizes cannot be transferred, redeemed for cash or substituted by winner. Sponsor reserves the right in its sole and absolute discretion to award a substitute prize of equal or greater value if a prize described in these Official Rules is unavailable or cannot be awarded, in whole or in part, for any reason. The ARV of the prize represents Sponsor's good faith determination. That determination is final and binding and cannot be appealed. If the actual value of the prize turns out to be less than the stated ARV, the difference will not be awarded in cash. Sponsor makes no representation or warranty concerning the appearance, safety or performance of any prize awarded. Restrictions, conditions, and limitations may apply. Sponsor will not replace any lost or stolen prize items. Prize will only be awarded and/or delivered to addresses within All Countries. All federal, state and/or local taxes, fees, and surcharges are the sole responsibility of the prize winner. Failure to comply with the Official Rules will result in forfeiture of the prize.