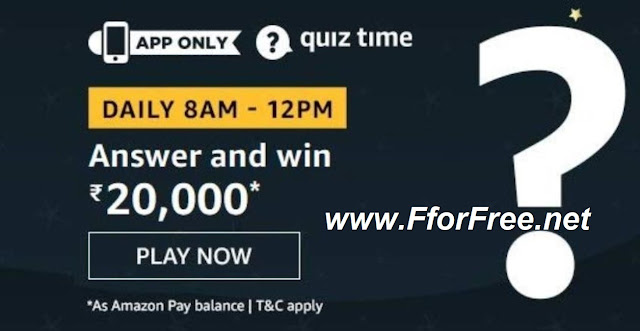 Amazon Quiz All Answers 10th August 2020
Q1. Which renowned striker has become the first player to score 50 goals in Serie A, Premier League and La Liga?
Amswer is Cristiano Ronaldo
Q2. Which of these is considered to be the world’s oldest film festival, whose 77th edition is slated to happen in September 2020?
Amswer is Venice Film Festival
Q3. ‘Quest for Restoring Financial Stability in India’ is a recently released book written by which Former Deputy Governor of RBI?
Amswer is Viral Acharya
Q4. Which Professional football league in India has become the first league from South Asia to be inducted in the World Leagues Forum?
Amswer is ISL
Q5. Which former diplomat is the author of the recently released book ‘The India Way: Strategies for an Uncertain World’?
Amswer is S Jaishankar
Posted by FforFree
Labels: amazon quiz, Big Contests, Prizes