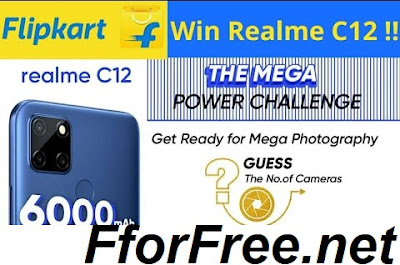 1. Download or Update the latest Flipkart App >> ENTER HERE
2. Play The Mega Power Challenge to find the Number of Cameras

Realme C12 phone is expected to come at a price higher than the Realme C11 that was launched in India last month at Rs. 7,409 for the single 2GB RAM + 32GB storage configuration. Realme C12 is expected to come with a triple rear camera setup, paired with an LED flash. The phone appears to have a rear-mounted fingerprint sensor. Further, it includes the 6,000 mAh battery that is teased by the company to deliver 56 days of standby time, 47 hours of voice calling, or 60+ hours of music playback on a single charge only
Posted by FforFree
Labels: Big Contests, flipkart quiz, Prizes