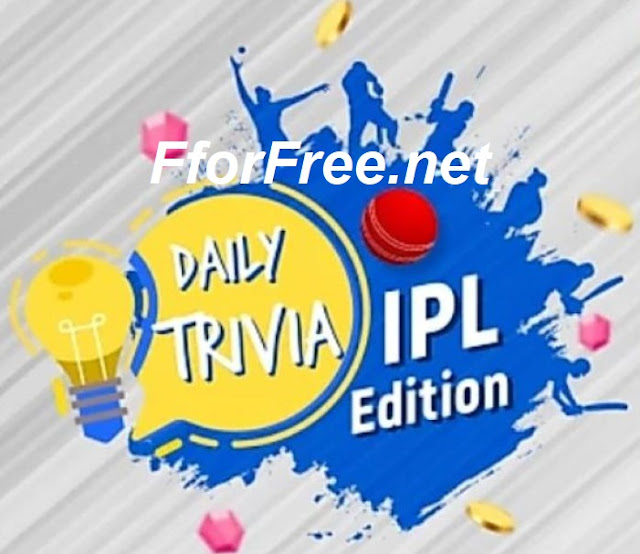 Flipkart IPL 2020 edition Trivia September 2020  Winners of the quiz will be announced within 15 days from the date of participation on game zone and rewards will be given within 30 days of winner announcement and can check the same in their Gems or wallet section in the flipkart app. Contest ends 30th Sept, 2020

Q1. Which player scored a swashbuckling century (158 Runs in 73 balls) in the first ever IPL match?

Q3. Only 16 players have taken a hattrick in the IPL. Who among these is one of them?

Q4. With 6 wins in the last 12 IPL seasons, which team has won the highest no. of Fair Play Awards?

Q5. Which player has scored the fastest century (in just 30 balls) in the history of the IPL?

Question 1. Which IPL team’s owner is being shown in the picture?

Question 2. Which IPL teams home ground is the M. A. Chidambaram Stadium?

Question 3. Which team became the first to rope in an American player in the IPL?

Question 4. Who holds the record of taking the most wickets in IPL?

Question 5. Which mobile phone company pulled out as the title sponsor of IPL this year?

Answer: Vivo
Flipkart IPL edition Trivia 20th September 2020 - All Answers to Win assured Gifts
1) With which IPL team would you associate the Reliance subsidiary India Win Sports?
Answer : Mumbai Indians
2) Which of these CSK players returned to India from UAE citing personal reasons?
Answer : Suresh Raina
3) Which team is being captained by the player shown in the picture?
Answer : Sunrisers Hyderabad
4) To which team was former Kings XI Punjab captain R. Ashwin transferred in 2019?
Answer : Delhi capitals
5) Who is the most expensive player of the IPL 2020 auction?
Answer : Pat Cummins

Question 1. Which team was captained by this cricketer in the inaugural season of the IPL?

Question 2. In which South Indian city was the IPL team Deccan Chargers based?

Question 3. Which of these beverage companies has been the title sponsor of IPL?

Question 4. For which of these feats is this award given in the IPL?

Question 5. Which is the only current team to have never appeared in an IPL final?

Question 1. The web series ‘Roar of the Lion’ is based on which IPL team?

Question 2. Identify the Product’s Mother Brand from its Image snippet

Question 3. What is the colour of the jersey of the IPL team Rajasthan Royals?

Question 4. This TV is a fine Product of Imagine & Intelligence. What all would be the features in this masterpiece to Boast about?”

Answer: All the Above

Question 5. Which of these Edutech companies is one of the official partners of IPL 2020?

Question 6. This particular feature of the Pro model of this Masterpiece TV sets it aside from all its contemporaries. Are you imaginative enough to guess it?

Question 1: Which team is being coached by this New Zealand cricketer?
Answer 1: Kolkata Knight Riders
Question 2: Which of these is the official anthem of the IPL team Rajasthan Royals?
Answer 2: Halla Bol
Question 3: Who among these was banned in the 2008 IPL season for slapping another cricketer?
Answer 3: Harbhajan Singh
Question 4: Which team bought Piyush Chawla, the most expensive Indian of IPL 2020?
Answer 4: Chennai Super Kings
Question 5: Who among these West Indian cricketers has played all his IPL matches for the same team?

Flipkart Quiz All answers for September 28, 2020

Question 1. Which of these stadiums is the home ground of the KKR team?

Question 3. Which team has a band on the logo with KJHPH written on it?

Question 4. Which player has won as well as lost the most IPL matches as captain?

Question 5. Which former IPL team’s owner do you see in the picture?

Flipkart Quiz All answers to September 29, 2020

Question 1) Who is the most successful captain in the IPL with 4 title wins?

Question 2) After which politician is Delhi Capitals home ground name?

Question 3) Identify this Rajasthan Royals player who is the youngest player to score an IPL fifty.

Question 5) Which of these countries’ player has never captained an IPL team?

Question 2. He is the only English player to captain an IPL team. Identify him.

Question 3. He is the only person from his country to play in the IPL. Which country does he belong to?

Question 4. In which IPL team’s logo would you see the ‘Sudarshan Chakra’?

Question 5. After M. S. Dhoni, who has played the role of a captain in most IPL matches?