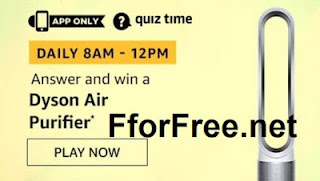 To be eligible for the Contest, during the Contest Period you must sign-in to or sign-up from an account on the Amazon app Once you have signed-in to the Amazon.in App, you can participate by navigating to the page where 5 (five) questions will be posted during the entire Contest Period. Thereafter, if you answer all the quiz questions correctly, you will be entitled for a lucky draw which will be carried out among all the participants who have answered that particular question correctly.
>> ENTER HERE

Q1) Housing For All — A Better Urban Future’ is the 2020 theme for which day celebrated every year by the UN on October 5?

Q2) 23 Yards’ is a new brand of personal care products launched by which former Indian cricketer?

Q3) The BBC short story award for 2020, won by Sarah Hall who became the first to ever win the award twice, is supported by which University?

Q5) Who was the first Indian woman to win a silver medal in this sport in the Olympics?