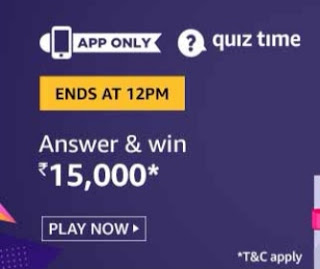 To be eligible for the Contest, during the Contest Period you must sign-in to or sign-up from an account on the Amazon app Once you have signed-in to the Amazon.in App, you can participate by navigating to the page where 5 (five) questions will be posted during the entire Contest Period. Thereafter, if you answer all the quiz questions correctly, you will be entitled for a lucky draw which will be carried out among all the participants who have answered that particular question correctly.

Q1) Indian Army Chief General MM Naravane has recently been awarded the honorary rank of ‘General’ by which country?

Q2) Which site, home to 2000-year-old designs on the ground – known as geoglyphs, was first discovered by a Peruvian aerial surveyor in 1927?

Q3) Currently the world’s largest multi-stage lift irrigation project, The Kaleshwaram Lift Irrigation Project is a project on which river?

Q4) Which dynasty built this wall around the border of China in the ancient days?

Q5) Who among these has NOT won a gold medal at the Olympics in this sport in singles?