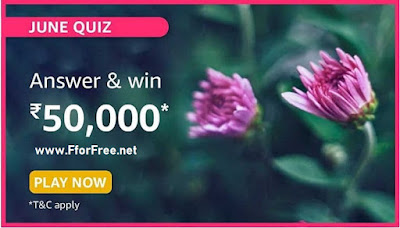 Amazon June Quiz & Win Rs 50000 Amazon Pay Balance. Total 1 Prize that will be given under this contest. The Prizes will be delivered to the winner on or before  20th July, 2021 Contest ends 15th June, 2021 11:59 PM Winners will be announced by 16th June, 2021
>> ENTER HERE
Amazon June Quiz Time All Answers to Win Rs 50000
1. On 1st June, 1926 which famous Hollywood star was born as Norma Jean Mortensen?
Answer : Marilyn Monroe
2. On 11th June, 1913 famous coach Vince Lombardi was born. The trophy given to the winners of which league is named after him?
Answer : NFL
3. On 21st June, 2018 Kota entered the Guinness Book of World Records, when over 1 lakh people performed what at one place at the same time?
Answer : Yoga
4. On 30th June, on the anniversary of the Siberian Tunguska event in 1908, where a major explosion happened, what day is observed?
Answer : World Asteroid Day
5. In June 2011, which 22 year old claimed the first golf major of his career when he won the US Open, creating a new scoring record?
Answer : Rory McIlroy
6. On 5th June, 2019 which movie was released where Salman Khan played the elder brother of Tabu?
Answer : Bharat
Posted by FforFree
Labels: amazon quiz, Big Contests, Prizes