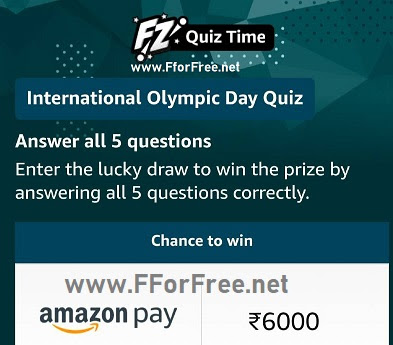 Amazon International Olympic Day Quiz to Win Rs 6000 Amazon Pay Balance. Total 1 Prize will be given under this contest. The Prizes will be delivered to the winner on or before  30th August, 2021 Contest ends  10th July, 2021
>> ENTER HERE

Amazon International Olympic Day Quiz Time All Answers to Win Rs 6000
1. The first International Olympic day was celebrated on 23rd June in which year?
Answer : 1948
2. In 1896, James Connolly became the first Olympic champion of the Modern Olympic Games by winning which event?
Answer : Hop, Skip and Jump
3. In the 1960 Olympics, Milkha Singh came 4th in which event?
Answer : 400 meters
4. When Leander Paes, won the bronze in the Olympic Games in 1996, which famous player won gold?
Answer : Andre Agassi
5. Michael Phelps holds the record for most number of gold medals at the Olympic Games with how many?
Answer : 23
Posted by FforFree
Labels: amazon quiz, Big Contests, Prizes