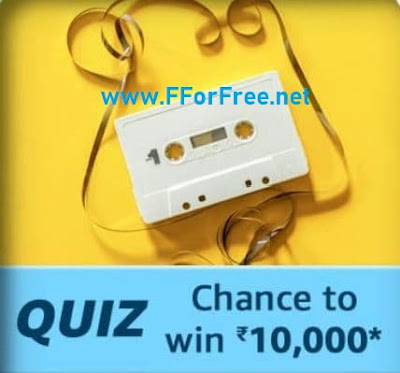 Amazon World Music Day Quiz & Win Rs 10000 Amazon Pay Balance. Total 3 Prizes that will be given under this contest. The Prize will be delivered to the winner on or before 30th August, 2021 Contest ends on 30th June
>> ENTER HERE
Amazon World Music Day Quiz Time All Answers to Win Rs 10000
1. Who was awarded India’s highest civilian honour, the Bharat Ratna, in 1999?
Answer : Ravi Shankar
2. Who won Padma Bhushan in the year 2010?
Answer : AR Rahman
3. Which Arijit Singh song features Rajkumar Rao and patralekha in the film citylights?
Answer : Muskurane
4. Which is the songs that launched Justin bieber to superstardom?
Answer : Baby
5. Which mathematical symbol is not the name of an Ed Sheeren’s album?
Answer : Subtract
6. What the is complete name of this famous singer- Taylor ___?
Answer : Swift
Posted by FforFree
Labels: amazon quiz, Big Contests, Prizes