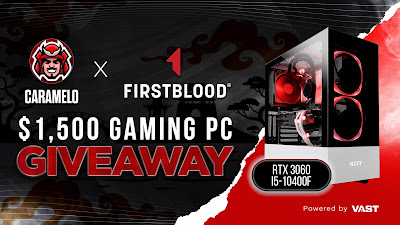 Caramelo and FirstBlood are excited to announce this $1,500 RTX 3060 Gaming PC Vast Campaign ending May 12th, at 11:59 pm pst. One winner will be drawn and notified via email to claim their prize and announced on Twitter. No purchase is necessary to enter or win. Prize(s): $1,500 RTX 3060 Gaming PC
>> ENTER HERE
To enter this Giveaway, entrants must first click the Gleam link provided via the Twitter or Facebook post promoting the giveaway. Then perform social actions to gain entries for this Giveaway. Any attempt by any person to obtain more than the stated number of Entries by using multiple/different Twitter accounts, or any other methods including, without limitation, script, macro or any automated or other means which subverts the entry process, will void all of that person’s entries and that person will be disqualified. Any user not using their main social account for entry (I.E. Giveaway accounts), will void all entries and cannot win this giveaway. One (1) random drawing will be held after the conclusion of the Giveaway Period. Winner(s) will be randomly drawn from the eligible entries received during the Giveaway Period. The random drawing will be conducted by the hosting party, whose decisions are final and binding on all matters relating to the Giveaway. Odds of winning depend on the number of eligible Entries received.   Within thirty (30) business days of the conclusion of the Giveaway Period, the hosting party shall endeavor to notify potential winner(s) (“Winner(s)”) via Twitter Direct Message (“DM”) to obtain email, mailing address and phone number. Winner(s) may be subject to verification of the entrant’s eligibility and compliance with these Official Rules. Winner(s) notification not acknowledged by winner(s) within twenty-four (24) hours after outreach from hosting party may be forfeited at hosting party's discretion and awarded to an alternate winner(s) selected by hosting party. Any prizes not claimed by alternates within twenty-four (24) hours after outreach from hosting party shall be considered forfeited
Winner(s) may not substitute, assign or transfer prizes, or redeem prizes for cash, but the hosting party reserves the right, in its sole discretion to substitute prizes (or a portion thereof) with other prizes of comparable or greater value. All prize details are at the hosting party’s sole discretion. Allow eight (8) to ten (10) weeks after winner notification.
Posted by FforFree
Labels: Giveaway, Prizes, worldwide