Amazon 2022 Prime Day is back - All Deals Revealed 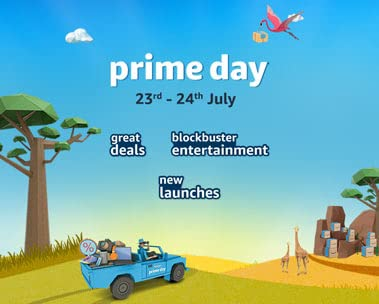 Amazon will run its annual sales Prime Day on July 23 and 24th 2022 its expected over 30,000 new product launches from over 400 top Indian and global brands like Samsung, Xiaomi, Intel, boAt, and 2,000 new product launches from over 120 Small and Medium Businesses.  Amazon will start special deals from July 7 till July 22 onward but the discounts and option for shopping will be higher during Prime Day. Check all deals here
>> ENTER HERE

Customers using ICICI Bank and SBI cards and EMI transactions will get 10 percent discounts on various products during the sale. Amazon will bring up to 55 percent discount on its Echo, Fire TV, and Kindle devices under the Prime Day sale in the country. There will also be deals across smartphones, consumer electronics, appliances, TVs, kitchen, daily essentials, and toys, among others. Further, the online marketplace is touted to bring deals on Amazon Basics Fire TV Edition TVs during the sale. The Prime Day sale will also bring deals on Alexa inbuilt smartphones, smartwatches, speakers, TVs and more
Amazon shopping app on Android as well as Alexa on Echo devices will be able to provide details about the two-day event by saying, "Alexa, what is Prime Day?" In addition to the deals and discounts on various items, the Prime Day sale will bring rewards of up to Rs. 2,500 to customers paying for their bills and recharges and sending money using Amazon Pay. These rewards will be available until the beginning of the sale event. Amazon Prime members will also get unlimited five percent cashback on Prime Day purchases using the Amazon Pay ICICI Bank credit card. Signing up for the credit card is also claimed to bring Rs. 2,200 in rewards
Prime Day event will additionally bring the release of two Indian Amazon Original series, namely Modern Love Hyderabad in Telugu on July 7 and Comicstaan Season 3 in Hindi on July 14. Prime members are also teased to get two additional "highly anticipated" titles that will be announced close to the Prime Day sale. Amazon will also offer Prime members up to 50 percent discount on purchasing most add-on subscriptions among the 12 video streaming services that are bundled under Prime Video Channels FREE
Amazon Music users in India will get two playlists chutiyeah Desi Vibes in Hindi and Fully Tolly in Telugu. Indic language playlist will also feature star artists including AR Rahman, Jubin Nautiyal, Ritviz, and others headlining from Bollywood, Indian Pop and independent pop scene in Hindi music. Prime Reading users will get 18 e-books to read for free across fiction, history, investing, philosophy and children's books, including the bestseller One Indian Girl by Chetan Bhagat, Think Straight: Change your thoughts, change your life, Chanakya in the Classroom, Irrfan Khan: The Man, The Dreamer, The Star
Posted by FforFree
Labels: big deals, big offers, discounts