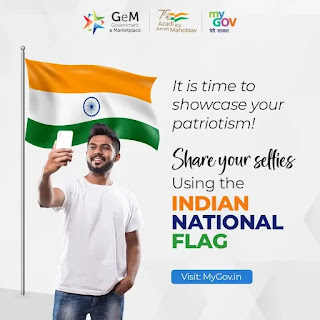 Commemorate 75 years of Indian independence and the glorious history of its people, culture, and achievements, Government of India marked an initiative of AZADI KA AMRIT MAHOTSAV. Under this, the initiative of “Har Ghar Tiranga” is marked to invoke the feeling of patriotism in the hearts of the people of India and promote awareness about our National Flag. To extend this initiative & celebration of nationalism and patriotism across India, a pan India “Selfie Competition using the Indian National Flag” is being organised by GeM and hosted on MyGov to encourage and invite citizens to click their selfie images to showcase and promote the importance of the national flag across the country. This competition is open to all Indian nationals registered with MyGov, age no bar. *One should click their selfies using the national flag in the best creative way.
>> ENTER HERE
Last Date of Submission is 26 July 2022Prizes