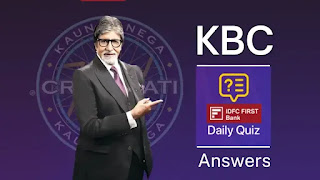 3) Tap on the daily quiz option and play daily to add more points to your score.

4) For every correct answer you will earn 100 points, total 1000 points daily. KBC IDFC first bank daily quiz answers are given below.

5) Along with daily quiz you can play KBC Play Along at 9 pm daily from Mon to Sat. Scoring points and getting ahead on the leader board will earn you exciting prizes. You can check the prizes thet you have won in the ‘my earnings’ section.

Q1) Who among the following authors is the only one to win the ‘Booker of Bookers’ prize?

Q2) With how many neighbouring countries does India share its land border with?

Q3) IDFC FIRST Bank sponsors which of the below marathons?

Q4) Which of the following freedom fighters presided over the 1st session of Congress conducted in Mumbai (then Bombay) in 1885?

Q5) For which of the following movies did Amitabh Bachchan lend his voice as a narrator?

Q1) Which of the following is the highest waterfall in India?

Q3) Which of the below deposit facilities does IDFC FIRST Bank provide?

Q4) Who is referred to as ‘The Father of Internet’ in India, who passed away in July 2022?

Q5) In 2019, Vicky Kaushal won the National Film Award for Best Actor for which film?

Q1) In which district of Uttar Pradesh did the Chauri Chaura Movement take place?

Q2) Which of the following is the largest river delta in the world in terms of its size?

Q3) Children of which of the following species are known as Blackbacks?

Q4) According to the Sample Registration Survey which Indian state had the highest life expectancy rate between 2013-17?

Q5) What was Ranbir Kapoor’s debut film as an actor?

Q1) Which of the below loans does IDFC FIRST Bank offer?

Q2) The popular T.V. series ‘Squid Game’ was produced in which country?

Q3) ‘Lotia’ is the regional music associated with which of the following Indian states?

Q5) The famous monument ‘Sanchi Stupa’ is associated with which of the following religions?

Q1) Which state government has partnered with the United Nations Development Programme (UNDP) for Data in Climate Resilient Agriculture (CRA)?

Q3) Who has been appointed as the new MD and CEO of the National Stock Exchange (NSE) in July 2022?

Q4) According to the Sample Registration Survey which Indian state had the lowest life expectancy rate between 2013-17?

Q5) Which of the following days is observed as “World Water Day”?

Q1) On which day was the National Emblem of India adopted?

Q3) Prime Minister Narendra Modi inaugurated the revamped Baba Baidyanathdham temple area in which state under the Prasad scheme of the Ministry of Tourism?

Q4) Which Indian city has been listed by TIME magazine in its list of the ‘World’s greatest places’ of 2022?

Q5) Pope Francis has inducted how many women to a previously all male committee that advises him in selecting the world’s bishops?